STATE OF VIETNAM Stamp of 1952 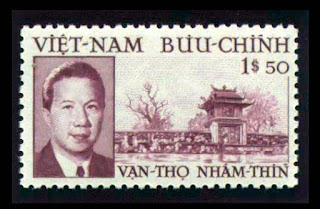 
Born Nguyen Vinh Thuy in 1913, he reached the throne in 1926, taking the tilte Bao Dai (Keeper of Greatness) as sovereign. And he assumed his royal duties at Hue, the Emperial City, in 1932. Initially, he tried to modernize Viet Nam and introduce reforms but France was unwilling to cooperate.

During World War II, when the France was under German control, Bao Dai was forced to collaborate with the Japanese invaders.
When Japan surrendered, Bao Dai was name "Citizen Prince Nguyen Vinh Thuy" by Viet Minh. He soon saw the Viet Minh would give him no more than advisory role and on the eve of Vietnam's declaration of war againts France in 1946, he fled to Hong Kong to resume a life of leisure
In 1949, Bao Dai returned from exile and became interim premier, and shortly after, the French reinstalled him as monarch. However, he continued his hedonistic lifestyle, leaving the task of governing to his Pro-French aides.
After Ho Chi Minh's victory in 1954 and the withdrawal of the French from Viet Nam, Bao Dai left for exile in sourthern France and played no further political role in Vietnam's affairs.
He died in exlie at 83!

Email ThisBlogThis!Share to TwitterShare to FacebookShare to Pinterest
Labels: State of VN 1952, State of VN Stamps